A Munich alcohol gathering with a difference

Guest post by John Mooney, senior lecturer in Public Health at The University of Sunderland

The mention of the German city of Munich and alcohol in the same sentence normally conjures up the image of a buxom serving wench in traditional Bavarian costume plying glasses of beer during Octoberfest, a prominent component of which is the Munich Beer Festival. Announcing to colleagues therefore that I was attending an alcohol public health conference in the city last week met with a few raised eyebrows – together with enquiries about whether I had got the wrong month! 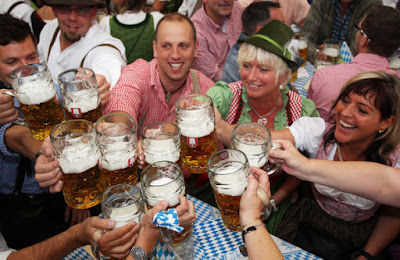 This was most certainly not the case – for in addition to hosting the G7 conference in the nearby Bavarian mountains at the weekend, Munich was also last week’s venue for the 41st Meeting of the Kettil Brunn Society’s Alcohol Epidemiology conference. Established in 1986, the Kettil Bruun Society (KBS) is an international organisation of scientists engaged in research on the social aspects of alcohol use and alcohol problems. Given that the task of containing alcohol harm is now a truly worldwide public health challenge, the Society aims to promote social and epidemiological research on alcohol in a spirit of international cooperation and information exchange.

As a second time attendee, this year’s conference programme was just as packed and varied as the 2104 meeting in Turin – and the start of summer proper in Southern Germany ensured that temperatures were also comparable! Morning plenary sessions focused on current topical debates such as the relative merits of abstinence over harm reduction approaches, the latter including the controversial Dutch experiment where alcoholics who were resistant to treatment received payment partly in beer for undertaking community work.

The conference setting in the University of Munich’s Institute for Psychiatry and Psychotherapy meant that the psychological and mental health dimensions surrounding alcohol misuse were never far from the surface. Indeed accurately remembering the route to the Alzheimer room (named after the eminent psychiatrist himself who was once based at the Medical School), was going to be the first challenge of my own presentation session!

The luxury of a week-long conference allows for a 10 minute speaking slot for all accepted abstracts (KBS is a poster free zone!). Another unconventional aspect compared to most other conferences is the requirement to submit a full draft paper of your work before the conference. In addition to offering delegates the chance to view your paper through the conference website, this also enables your allocated discussant the opportunity to prepare some constructive criticism of your work (discussants are each allocated two papers in one of the parallel sessions). Most attendees therefore are allocated a discussant slot as well as their own presentation, so the required preparation beforehand is substantially greater than for most conferences where pulling together some slides the weekend before can often suffice!

Among the many highlights of the parallel sessions I attended were the rising public awareness and policy implications of alcohol’s contribution to cancer risk (where frequent drinkers are less likely to perceive the risk); the perhaps unsurprising enthusiasm that the alcohol industry shows towards presenting alcohol predominantly as a ‘lifestyle choice’ as opposed to a risk factor; the usefulness of sewage monitoring for estimating population-level consumption alcohol; and the potential value of reformatting alcohol labels to enhance awareness of drink strengths and associated health risks.

Another annual characteristic of the KBS Conference is a strong presence by the Sheffield alcohol research group, where I had the considerable pleasure of working for two years and on which work (on local alcohol policies) my own presentation was based. Other presentations from the Sheffield Group included gender differences in the effectiveness of alcohol policies; the need for more transparency in setting drinking guidelines; socio-economic gradients in UK alcohol harms across the four constituent countries and also social gradients in specific cancers, attributable to disparities in tobacco and alcohol use.

Now based within the Fuse collaboration at the University of Sunderland, there should be no shortage of opportunities for continuing my research interests in alcohol and fruitful collaboration with expert centres such as Sheffield and the UK Centre for Tobacco and Alcohol Studies (UKCTAS). The North East of England, very much like my native Scotland, is acknowledged to have among the highest public health burdens attributable to alcohol consumption in the UK and is also pursuing some of the most innovative policy solutions such as cumulative impact policies and a late night levy, as well as a very pro-active third sector in the form of Balance North East.

Of course, the Fuse collaboration also includes Newcastle Universities Institute of Health and Society acknowledged for extensive research into the effectiveness of screening and brief interventions for hazardous drinking as well as the alcohol and public health research team at Teeside University (TeamAlphaTees). The North East is well placed therefore for research into all aspects of alcohol harm treatment and prevention, although as yet, it has no October festival – which is probably something else to be grateful for!

Author affiliation
John Mooney FFPH, is a senior lecturer in Public Health at The University of Sunderland. He was previously a research associate with the Alcohol Research Group at The University of Sheffield, funded by the UK NIHR School of Public Health Research, which also funded his attendance and participation at this year’s KBS Conference
Posted by Fuse at 06:00