Shielding against the impact of the dementia time bomb


Today (September 21) marks the anniversary of World Alzheimer’s Day which aims to raise public awareness about this most common form of dementia.

Dementia represents one of the main causes of disability in later life. Current estimates indicate that someone is diagnosed with the disease every 68 seconds. Alzheimer’s affects 44 million people globally with this figure predicted to triple over the next 35 years - a phenomenon aptly named 'The Dementia Time Bomb'. Advances in health mean many more people are surviving life-threatening diseases such as cancer, but susceptible to life limiting diseases such as dementia.

By 2030 more than 20 million people in the UK will be aged 60 or over. For people familiar with dementia it is one of the diseases most feared as they approach 60 years of age, a fear justified given the increased prevalence of the disease once we reach this milestone, a fear heightened by the fact that it is irreversible and terminal.

The impact of all this truly hit home during a recent conversation with my mother. Renowned for her ability to trounce all-comers at Scrabble, she struggled to recall the word ‘padlock’ prompting her to quip, with mock seriousness, that perhaps she was succumbing to the disease. My mother’s perception of Alzheimer’s still follows a traditional and mistaken one that Alzheimer’s disease is a typical and therefore ‘normal’ part of ageing. She is not alone: it is estimated that around 60% of people worldwide also incorrectly believe this, while 40% of people mistakenly think it is not fatal. I on the other hand stopped dead in my tracks. The sudden realisation that my mother’s uncharacteristic memory block might genuinely be a precursor to the more serious cerebral ‘padlocks’ associated with dementia. As a researcher involved in dementia I was only too well aware that Stage 2 of the disease is generally represented by very mild cognitive decline, including deficits to semantic memory that can include a sudden inability to recall everyday words. Much worse though was my knowledge that the later stage of Alzheimer’s can be marked by far more severe symptoms as part of a terminal degenerative process that can endure for 15 long years. A key question ran through my mind at this point: who would care for my mother if she did develop dementia? 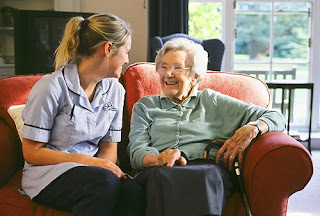 In the vast majority of cases it is a family member who will elect to take on this role. One in eight of the UK adult population already provides such an unpaid but invaluable service. However, a central problem with our continued reliance on unpaid care is that, in general, family carers of people with dementia experience greater health inequalities due to the chronic stress commonly associated with long-term caregiving. This threatens carers' health whilst also undermining their ability to continue to provide care. A key question therefore is, ‘who will care for the carers?’ This question was the springboard for the research project I am presently engaged in which seeks to investigate, ‘What works to support family carers of people with dementia?’ While myriad resources exist that might potentially be made available, what is noticeably absent is any agreed ‘gold standard’ of support that might be put into place, tailored according to the different stages of Alzheimer’s. Unlocking this particular dementia challenge will not prevent the ‘time bomb,’ but it can offer families a much needed protective shield if and when that time does come. The need to raise awareness of dementia and the challenges associated with it has never been more urgent - the disease lies on all our doorsteps.

Mark is currently engaged in a project concerned with several key questions related to Alzheimer’s disease: (i) which factors remain crucial to resilience-building for family carers of people with dementia (PWD) in order to maintain and sustain informal caregiving and which hinder it (ii) how can tailored support best be targeted to address the needs of specific carers? (iii) how can the inherent health inequalities faced by family carers of PWD be reduced?

UK Dementia Awareness Week 2015 took place 17-23 May. If you wish to find out more about Alzheimer's please visit the Alzheimer's Society website.

Did you enjoy reading this post? If so, please vote for Fuse in the UK Blog Awards 2016 by clicking here
Posted by Fuse at 06:00