From school dinners to sugar tax: Jamie Oliver to the rescue!

I have to say thanks to Jamie Oliver, the media attention from his School Dinners programme led to research questions which went on to form my PhD project (the effect of school meal legislation on child malnourishment). After completing my PhD I thought that would be the end to my connection with the celebrity chef, little did I know that our paths would cross again a few years later. I began work at Teesside University in October 2014 charged with conducting a systematic review into the effects of fiscal strategies on sugar consumption in collaboration with Public Health England (PHE). PHE had recently published 'Sugar reduction: responding to the challenge' which outlined the work they would undertake to assess the evidence base and identify potential areas that would be effective in reducing sugar consumption. 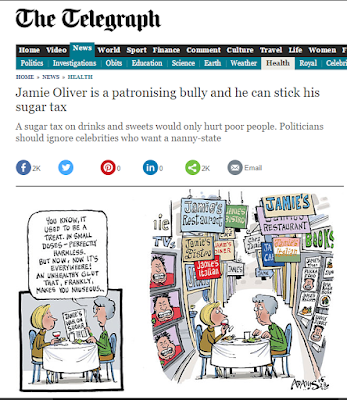 While we were busy searching through over seven thousand research papers the media were just as diligent in searching for almost anyone (including me) to provide information on whether the government would introduce a sugar tax. As we inched closer to the final number of relevant studies which we’d include in our review, Jamie Oliver waded into the debate. I admire the way he uses his celebrity status to push a healthy food agenda, however, I’m often left thinking whether his involvement does more damage than good. In terms of school food, I interviewed school cooks who said his School Dinners series resulted in an almost immediate decline in children taking a school meal. Some might say this was a good thing if the food was as bad as Jamie portrayed it. Well, it wasn’t that bad everywhere and this reduction in school meal uptake had a detrimental effect on the cooks as their salary was based on the number of children taking a school lunch. So when he entered the debate on a sugar tax it made me nervous. Jamie was branded a "patronising bully" by Alex Deane Executive Board Member of the People Against Sugar Tax campaign and tory MP Andrew Percy said Jamie’s suggestion of a sugar tax was "a classic nanny state reaction and it won’t work". I truly believe Jamie means well but his celebrity status often clouds the evidence and can result in detrimental consequences. 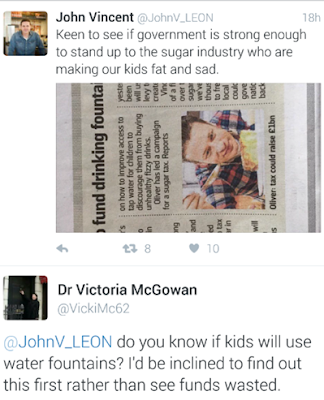 As we were in the process of finalising our review of the evidence, a total of 11 published studies, Jamie’s sugar tax campaign was gathering momentum with an online petition to have the issue debated in parliament and a new series being aired, Sugar Rush. Jamie wasn’t alone in his campaign, groups such as Action on Sugar and the Children’s Food Campaign, had been pushing for a tax long before Jamie came along, however, the addition of one more cook had the potential to spoil the broth. The authors of the School Food Plan, John Vincent and Henry Dimbleby have also advocated the introduction of a sugar tax and already introduced a 10p levy on sugar sweetened drinks in their LEON restaurants. However, with great celebrity status comes great responsibility. A recent article by Sian Griffiths discussed how the proceeds from these unofficial sugar taxes could be used to pay for drinking fountains in public parks with the view that it may help children access free drinking water rather than purchase sugary drinks. A novel idea but would it work? I asked John Vincent on Twitter whether kids would use these drinking fountains, he hasn't responded.


Before the ink had dried on our final copy reviewing the scientific evidence, Jamie Oliver et al had already decided that a sugar tax would reduce consumption and the government must take action. When PHE published Sugar reduction: evidence to action (see annexe 2 for our fiscal review) in October 2015 it almost seemed like closing the barn door after the horse had bolted. The media furore around the topic was so great that articles were too busy calling Jamie names and telling readers it was nanny state gone mad to pay any attention to the evidence. Our review of the evidence, although based on a small number of studies, suggested that consumers are responsive to changes in food and drink prices and this supports the evidence from modelling studies which indicate a tax of 10-20% would have a significant impact on purchases. Moreover, recent evidence from Mexico has shown that purchases of sugar sweetened drinks declined by up to 12% after the introduction of a sugar tax.

The evidence collated by PHE indicates that a sugar tax could have an impact on population health if implemented alongside a range of other strategies such as reducing marketing exposure and price promotions on high sugar products (we also reviewed the marketing evidence see annexe 3). However, this seems to have been diluted by the media whose attention has been focused on taxation. There are benefits to celebrity chefs wading into the public health arena as they can help bring some attention to important issues. However, I think they need to be mindful that their high media profile could have negative consequences. Parents, children, and school meal staff did not take too kindly to Jamie “transforming” school lunches and the skewed media attention on a sugar tax has the potential to undermine the evidence base before any attempts are made to implement a potentially beneficial health policy.