‘Afore ye go’… across the border for a cheap pint 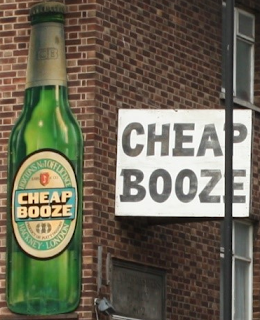 Like many former native Scots now living and working in North East England, the geographical, social and cultural parallels are just three areas of overlap that help keep homesickness for my country of origin at bay!

As a public health researcher some less fortunate similarities are often at the forefront of my mind, including a fondness for deep-fried food, an aversion to fresh vegetables and a damagingly long-ingrained culture of heavy drinking.  This is accompanied by an almost Scottish-scale public health burden to match. It will come as no surprise that as a whole, the North East has among the worst health statistics for alcohol related harm in England [1].

Of course it is also no coincidence that both North East England and much of Scotland’s central belt, particularly Greater Glasgow and Clyde Valley, have some of the most longstanding and concentrated areas of social deprivation and economic disadvantage in the UK. As recent research from Glasgow University has highlighted [2], deprivation and alcohol related health damage, present a particular kind of “double whammy”, even after adjusting for alcohol intake and other lifestyle factors such as smoking. 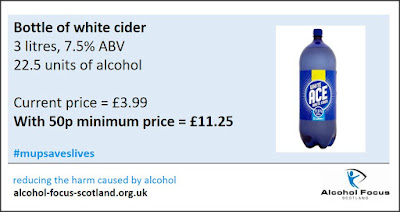 With these similarities in mind, there is an inescapable logic in looking to Scotland for a steer in terms of policy interventions that might reduce the unacceptably high public health burden due to alcohol in this part of the World. I refer of course to the introduction of a minimum unit price (MUP) of 50p for a unit of alcohol, which on the basis of rigorously evaluated international studies combined with sophisticated cost effectiveness modelling from the Alcohol Research Group at the University of Sheffield [3], is one of the best evidenced policies for reducing alcohol harm in the population.

Scotland is also at the forefront of (what may eventually lead to) a much more ‘fit-for-purpose’ legislative framework around alcohol licensing and availability: namely the inclusion of 'health' as a licensing objective (or ‘HALO’). In principle, this has the potential to transform the capacity of public health teams in English local authorities to make much more use of information on health harms as part of the licensing process. This would ensure that challenges to new licence applications - however potentially damaging the new licence may be - no longer need to be based exclusively on crime and public disorder evidence. To explore whether HALOs could also be used in England, our team at the University of Sunderland looked at the practicalities and logistics of using health information in English licensing decisions. The results have recently been published by Public Health England [4].

So what are the prospects for importing MUP and health objective policies to North East England?

Thankfully, on both policy and research fronts, there are also significant grounds for encouragement in the North East! Indeed, some of the most progressive public health policies around alcohol harm reduction, such as cumulative impact zones and late night levies, are now well established in a number of local authority areas. This has been possible thanks to strong political will and high profile regional level advocacy for alcohol harm reduction policies from Balance North East [5], which is funded collectively across most North East local authorities. Balance NE has already been calling for better controls on cheap alcohol availability in the wake of the Scottish Policy decision [6].

There is also no shortage of public health alcohol research effort in the North East, with a long tradition of internationally renowned research from the Universities of Newcastle, Teesside and most recently our own contributions to several national level evaluations (such as HALO mentioned above).

In brief, there are many regional policy drivers already in place for North East England to emulate Scotland’s very progressive approach to the reduction of alcohol harms. With regard to the often raised criticism that price based measures such as MUP are ‘regressive’ due to a disproportionate financial impact on the poorest, it is difficult to rival the response of Scottish novelist Val McDermid on Thursday's (16 Nov) BBC Question time: “it’s actually about preventing people in our poorest communities drinking themselves to death with cheap alcohol”. It is difficult to figure out what particular definition of the term ‘regressive’ that this conforms to…