Please mind the health gap: turning complex equations into a call for action

As a quantitative researcher, I sometimes find it difficult to see how the output from complex equations can make a difference to people’s lives. The launch event for the Northern Health Science Alliance (NHSA) Health for Wealth report was a fantastic opportunity to see first-hand how statistical analysis can actually be used to influence policy and practice. 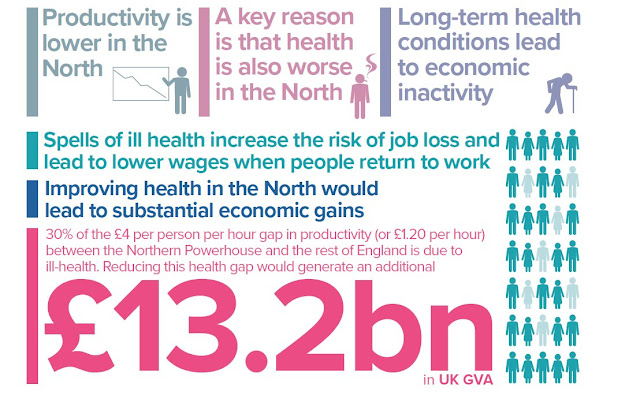 The productivity and health gap

The launch of the report took place in Newcastle at the Boiler Shop in the morning and at Lancaster House in London in the evening. The Boiler Shop is an impressive, urban industrial building set back from the Central Station. It was built in 1820 and was where Robert Stephenson and Company developed the world’s first locomotives. This has to be the perfect setting for the launch of the report. What better way to discuss how to build a healthier Northern Powerhouse for UK productivity than in this historically important space regarded as the ‘crucible of the Industrial Revolution’? The space is filled by a 100 plus audience of local policy makers, employers, health care practitioners, representatives from third sector organisations, academics, and the general public.

The morning event in Newcastle was kick started with a welcome address by Dame Jackie Daniel, Chief Executive of Newcastle Hospital and NHS Foundation Trust. She outlined how the Trust was very good at meeting targets and is one of the best performing Trusts in the country. But, the North East is still faced with reduced life expectancy and worse health outcomes than the rest of England. To solve this problem she said, we need a joint approach working with employers, local government, the voluntary sector, and the NHS. The report makes the case why it is in everyone’s interest to work together and that improving health, will improve economic prospects.

This was followed by a summary of the report findings by Fuse Deputy Director Professor Clare Bambra highlighting how 30% or £1.20 of the productivity gap between the Northern Powerhouse region and the rest of England can be explained by health. Reducing this health gap would generate an additional £3.2 billion in Gross Value Added (a measure of economic productivity).

Next up was the leader of Newcastle City’s Council Nick Forbes. He discussed how in his role he can take the results from the report to try and make a positive change to the economic and health prospects for Newcastle. He also outlined the challenges faced from the current political climate in terms of squeezed budgets for local authorities and public health in particular.

Then there was a Q&A session where interesting questions were raised by a member of the voluntary sector on implementation and the need to involve the local community.

Finally, there was a closing address by Dr Hakim Yadi OBE, CEO of the NHSA, stressing how there was a need to make an economic case for improving health to get the central government to listen and take actual steps to make a difference.

I left the event thinking about how I present my research questions and findings and that when presented in a way that can be understood by key stakeholders, quantitative analysis can be meaningful and useful. The focus does not need to be on the complex equations but how the output from these equations can be used to change opinions or make a case for action.

I hope that the findings from this report lead to real change in improving health and economic prospects for all of us living in the Northern Powerhouse. I also hope that it changes the way I think about how I present my findings and research questions to generate evidence that can easily be used to make a real difference to public health and reducing health inequalities.