By invitation-only, at a secret location, with no agenda - this is Sci Foo ‘unconferencing’


I’ve been back home from Sci Foo for more than a week. I’m not missing the Californian sunshine as the North East weather has actually been rather seasonal, but I am missing two things; the incredible Google micro-kitchens and the people I had the good fortune to meet. 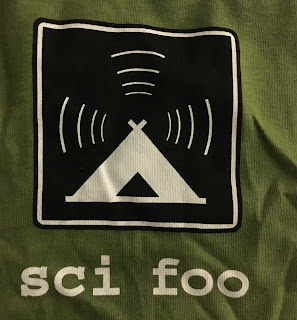 Before the email arrived - which incidentally, I almost deleted thinking it was another spam invitation to a fictional conference in some far flung location - I hadn’t heard of Sci Foo. Thankfully, I forwarded it to our University Director of Corporate Communications and Public Relations, who was suitably excited.

That was April.  Fast forward to July and I’m on a 10-hour flight to San Francisco (feeling very relieved that I don’t have to entertain the kids on such a long haul). At this point I’m still not that clear what an ‘unconference’ conference is.

When I arrive, I have to download Uber to my phone (not a necessity when living in rural north Yorkshire) and I find my destination with only jet lag to contend with - a theme common throughout my three days at Sci Foo. To be fair, I had jet lag before getting here courtesy of a three-year-old.

On Friday evening, we are bused to the top secret Google X complex and it starts – as all good things should – with food. I can’t remember the last time I went to an event where I didn’t know anyone at all other than some vaguely recognisable faces from the twittersphere.
But with food came conversation.

At around 8pm the conference started (bearing in mind that I had been awake since 3am) and the message was clear. Be inclusive, be kind, be curious and talk to people from as many diverse fields as possible. That was very easy, as I soon discovered, most people were doing or studying things I hadn’t heard of, or had zero comprehension. It was awe inspiring.

I soon discovered that an ‘unconference’ is completely participant-driven and from a distance this looked a bit like a rugby scrum. 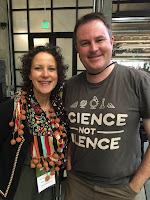 But with encouragement from my new found food friends I joined the pack and put down a session on ‘silencing science’ - discussing whether our role as scientists is to be neutral or advocates. I met Prof Shaun Hendy and Dr Siouxsie Wiles both phenomenal science communicators from the University of Auckland, New Zealand and we devised a session for Saturday morning based on the range of experiences Shaun had collated in his book ‘Silencing Science’.

The rest of the day was incredible – from sessions on trust in science, to the future of scientific publishing – and did I say that the food was great?! Sleep deprivation is nothing when you have access to kettles with higher and lower temperatures depending on the type of tea you select. 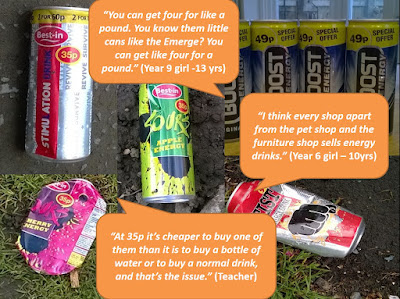 On Sunday morning it was my turn to give a ‘lightening talk’ on our Fuse energy drink research, alongside a handful of other presenters. Speakers one and two were incredible with amazing graphics, audio and visuals. My more low-tech approach highlighted the powerful words of our young respondents, illustrating what the consumption of energy drinks means to them. 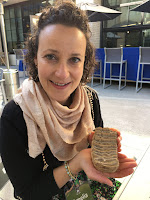 Sci Foo was only three days but it felt longer, in a good way. There were many highlights, including holding a Woolly Mammoth’s actual tooth during breakfast [add photo], discussing galaxy formations with cosmologist and Prof of Physics Risa Wechsler and attending a session on ‘fully automated luxury feminism’!

There can’t be many conferences – no make that occasions in life - where you can share the same room with the most influential skateboarder in history, Rodney Mullen and a Nobel Laureate.

I hit a conference high attending Sci Foo. It was incredible and lots of people worked very hard to make it such a brilliant event. Particularly Cat Allman, the team from O’Reilly Media, Digital Science, Nature Publishing Group and Google Inc.

My take home message is: if you ever get invited to one of these ‘Foo’ events, say yes - you won’t regret it.