The first step to an equal North


The inaugural meeting of the North of England’s research and practitioner network to address health and social inequalities, hosted by Fuse in Newcastle, was an inspiring beginning. Over 350 people have signed up to ‘Equal North’, including most universities and local practitioners. Judging by the energy and ideas in the room this is going to be an interesting and important development and journey. 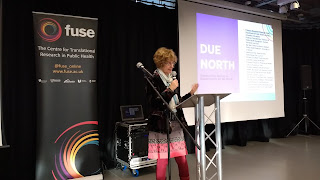 We heard from Professor Dame Margaret Whitehead (pictured left) who chaired the original ‘Due North’ inquiry on health inequality in the north in 2014. Due North had flagged health in all policies as a potential lever and her recent work with the House of Commons All Parliamentary Party Group on Health in All Policies was particularly impressive. 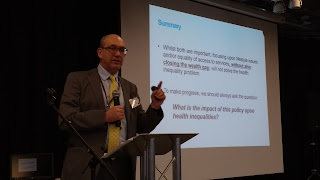 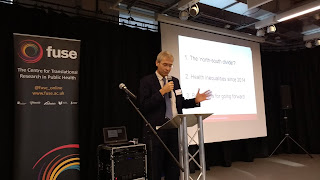 And I (pictured left) described some of what has happened since Due North was published. In preparing my slides I wanted to go back and look myself at earlier work from Yorkshire and Humber days when we measured health inequalities in life expectancy, a government target 10 years ago.


What I found was striking: affluent areas, such as York, North Yorkshire and East Riding which had life expectancies above the England average five years ago (78.6 years for men / 82.6 years for women) improved still further to the national trend (which has increased by an average of 0.4 years over five years). Lowest for life expectancy - such as Hull for men and Doncaster, Wakefield and Barnsley for women - made no improvement at all. The increasing gap is the challenge; whether we look at health, education, or the economy. In a highly-centralised country like England such inequalities are hardwired into the fabric of the country from infrastructure investment to schools.

The seismic shifts following the Brexit vote could change all of this. Theresa May said on the steps of Downing Street that she wants to address the injustice of inequality and the ‘nine year gap’, referring to recent PHE published data on life expectancy. The new Industrial Strategy, launched on 22 January at a regional Cabinet held in an innovation park in Warrington; the RSA* Inclusive Growth Commission; and the early outputs from the National Infrastructure Commission and the Children’s Commissioner for England’s Growing Up North, again address what is needed.

It is in this context of widening inequality, with new national resolve to address it, that we launched Equal North. As a network of researchers and practitioners across the north this gives us a tremendous opportunity to influence policy:
This needs to put communities and individuals at the heart of the action, not graphs and charts. I said earlier that this could be an interesting and important journey. Together we made the first step in Newcastle.


For more information about this Fuse Quarterly Research Meeting please visit the event page on the Fuse website.  The presentations from the event will be available soon.


*Royal Society for the encouragement of Arts, Manufactures and Commerce
Posted by Fuse at 06:00