My own story of infant feeding is based in a community where breastfeeding was, and still is, not the norm. I was the first in my immediate family to breastfeed and I struggled with it in various ways. My breastfeeding journey ended much sooner than I had originally planned, when my son was just six weeks old. Two years later, my own sheer determination helped me to feed my second child, a daughter, for nine months.

Later, in a professional capacity, I worked supporting families in my role as Community Development Worker in Sure Start Children's Centres. I worked with mothers who had similar feeding stories to my own, as well as many women who had never breastfed. They, like most of the people around me, never had any intention to breastfeed.

The guilt I felt for breastfeeding my first child for a short time stayed with me for a long time. I did not understand why it had such an impact. Why did I feel the need to breastfeed when others around me did not appear to give breastfeeding a second thought? When the opportunity came for me to undertake PhD research, my choice of topic was never in doubt.

My research, which is supervised by Dr Deborah James from Northumbria University, is focused on the infant feeding stories of nine women who live in an area where breastfeeding rates are low. All of the women’s stories are equally important however, for the purposes of this blog I would like to introduce you to Claire (names have been changed to preserve anonymity), who formula fed her baby Sophia from birth.

Claire, her parents and grandparents have lived in the same local area all of their lives. Claire was a single parent and lived with Sophia’s grandparents when her daughter was first born. Sophia’s grandmother took an active part in her care. She looked after Sophia for two nights a week when she was first born, reducing this to just one night per week as time passed. Following a biographical narrative approach, which allows participants to tell their stories without interruption, I asked Claire for her story with the use of a single question;

"So, please can you tell me the story of your experiences of feeding milk to your baby?"


Claire’s story was dominated with discussion of branding and consumer goods. The pink bottles and the various brands of infant formula Claire gave to Sophia reveal the way media and advertising can influence infant feeding practice. Claire demonstrates that she was careful with her bottle-feeding choices. These choices were not arbitrary; she made clear decisions between brands and bottles. Claire wanted me to know that she had made the right choices for her and her daughter.

It was also quite clear that Claire’s identity, as the mother of a daughter, was an important part of her story. The ‘pink’ bottles represent this in a very visible way, she could perform her identity as a mother of a daughter with the right choice of bottle. Claire’s relationship with her own mother was important to her and she appeared keen to demonstrate that this mother-daughter bond would continue for another generation.

These stories help us to understand why some women breastfeed and others do not. Upon reflection, for me, I feel that breastfeeding was about being the best mother I could be, which explains the guilt I felt when I stopped. For Claire, feeding her baby was also about the same thing, only for Claire, being a good mother was about making the right consumption choices. In my thesis, I expand on how Claire’s choices were based on the social norms, the unwritten rules of how to be a mother, in the culture around her.
Posted by Fuse at 06:00 1 comment:

The impact of advice services on health: moving from gut feeling to concrete evidence 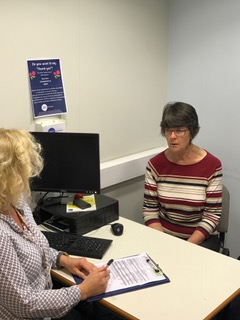 As a result, our work is predominantly around social welfare issues to include housing, money advice, welfare benefits, relationship and family issues, employment and consumer. In 2016/17 we helped 10,820 people with 71,487 advice issues. We estimate our work has a value to the wider governmental system of £11.5m.

For us, the link between our advice and health and wellbeing is obvious but persuading commissioners, policy makers and decision makers requires more than a gut feeling. So we feel very privileged indeed for the opportunity to work with Fuse and the research team at Northumbria University to investigate what we have always thought to be true, that our advice reduces stress and anxiety and improves wellbeing for our clients.

The research constituted of a realist evaluation (the protocol of which is detailed here) of three of our more intensive services – one for those with enduring mental health conditions, one for young people, and one for those referred through their GP. The research indicated that stress was decreased and wellbeing increased as a result of accessing the service, using the Perceived Stress Scale and Warwick Edinburgh Mental Wellbeing Scale. The research also tells us that our intensive advice services increase the options available to our clients, allowing them to be able to participate in more activities to promote wellbeing and reduce isolation. The service also creates trusting relationships with our clients, which was essential in maintaining relationships in order to help clients with their issues. Finally, the service works as a buffer between the client and state organisations such as the job centre and the Department of Work and Pensions, allowing the two to interact more efficiently.

We plan to maintain our relationship with the research team and we are starting to talk to them about how we can build on this work to learn even more about the link between advice services and the wellbeing of our beneficiaries.

The least we could expect is a postcard, to hear all about the fun that they're having while we’re stuck in the office watching droplets of rain compete in a race to the windowsill…

﻿﻿It’s not just academics who get amazing opportunities, PhD students do too!

﻿﻿
I am part of the Engineering and Physical Sciences Research Council (EPSRC) funded Digital Civics programme at Newcastle University and my research lies at the intersection of public health and human computer interaction (HCI) – broadly speaking. As part of this programme, I am are very fortunate to have the opportunity to undertake an exchange at another relevant institution.
﻿

Earlier this year, I travelled 2,637 miles to Northeastern University, where I began a three month internship as a research scholar at the Wellness Lab. The Wellness Lab is directed by Professor Andrea Parker and sits within the Personal Health Informatics department in School of Computing and Information Science. After having completed all of my preceding degrees at Newcastle, I was super excited to spend time in a different research institute and it didn’t disappoint! I had such a rewarding experience and because the lab was much smaller than I had anticipated that meant I developed close friendships with the other three students advised by Andrea.﻿﻿


The Wellness Lab has some very interesting research projects (and beautiful views from the office). The research mainly focusses on how digital technologies can alleviate health disparities and improve health and wellbeing across different populations. Some interesting papers here, here and here. I worked specifically on two projects - supporting reflective thinking through family storytelling to encourage physical activity and designing games for encouraging physical activity and social connectedness in Alzheimer’s Disease caregivers. Two very different projects based on gaming and public health, offering very different experiences and skill development and - although not largely related to my projects in the UK - both offered invaluable contributions to my development as a researcher.

I had the opportunity to lead some co-creation workshops with parents, creative writers and health experts to develop stories that could potentially encourage families to reflect on their physical activity behaviours – great fun and insightful, while introducing me to new methods and materials to facilitate important conversations around health, inspired by the value sensitive action-reflection model.

Unfortunately, the second project working with Alzheimer’s Disease caregivers progressed much slower and I didn’t quite get to the data collection stage, but I did design some paper prototype games which made me realise I need to work on my drawing skills!

I spent time working alongside Catherine D’Ignazio, Assistant Professor at Engagement Lab and Faculty Chair of Boston Civic Media – both of which are leading the way for collaborative, participatory civic research in Boston. Catherine and I worked together within a team of feminist HCI researchers to organise a 'Hacking Women’s Health' workshop at the Conference on Human Factors in Computing Systems in Denver, Colorado, in May this year. The event was a two-day workshop with a mixture of 25 academics and PhD students from across the world working on projects related to women’s health and technology. It was my first ever experience of organising a hackathon style workshop and it was such a successful (and fun) weekend. You can read another blog about it here.

Boston is a great city and the architecture is beautiful. My favourite and highly recommended leisure activity is to visit the Harvard Museum of Natural History where you can view the glass flower exhibition. It contains over 4000 different glass models representing more than 830 plant species that were made to teach botanicals all year round - super impressive. My inner science nerd was elated. A must see if visiting the city but avoid going in the winter! As beautiful as it was, the -12 degrees and two feet of snow every few days became tiresome.

Thank you to my PhD supervisors Madeline Balaam, for helping organise this opportunity, and to Emma Foster and Ashley Adamson for their continued support.

Please feel free to email me if you would like to know more about any of the projects or Digital Civics research – emma.simpson@newcastle.ac.uk