Catching golden opportunities to create public health evidence as they fly by...

This week it was announced that a UK collaboration led by Fuse had been awarded prestigious funding to lead a Public Health Intervention Responsive Studies Team (PHIRST), as part of a new national scheme.

When I was a Director of Public Health in London I knew that my team were delivering innovative schemes that affected large numbers of people. Our hope was that the schemes would improve health and reduce the health inequalities experienced by some highly deprived populations. But we didn’t really know whether they were achieving this.

Did the Healthy Schools programme working across more than 1,500 schools in the capital improve the health of thousands of children? Did the Healthy Workplace award scheme improve sick leave levels for London’s employers? Would getting the Healthy Streets approach into the heart of the Mayor’s Transport Strategy make any difference to physical activity levels in the city?

We were basing these schemes on the little evidence that was available, but we could not find a way to get them evaluated to build that evidence-base any further. Public health practice in local government is mainly distant from academic public health research. Local government does not have a culture of undertaking research. It moves fast, and does not have routes into research funding. Golden opportunities to learn and evaluate were being lost.


The NIHR’s Public Health Research programme (PHR) is experimenting with a new scheme to try and solve this conundrum – the PHIRST scheme. PHIRST stands for Public Health Intervention Responsive Studies Teams. The idea is that the PHR contracts with four academic teams who are ready and waiting, fully-funded, to evaluate schemes that are happening in local government across the UK.

The timing could probably not have been worse but somehow, despite pestilence and lockdown, we have managed to appoint four teams, and to match them up with four local authorities that are keen to have their schemes evaluated. Issues include:
The PHIRST teams are led by prominent public health researchers: Ashley Adamson (Newcastle University), Susie Sykes (London South Bank University), Rona Campbell (University of Bristol), and Katherine Brown and Wendy Willis (University of Hertfordshire). They will work closely with each local authority to co-create the evaluation with the heavy lifting being undertaken by the PHIRST teams and fully funded by the NIHR, starting in September.


And in a few months the PHR programme will go out to Directors of Public Health and ask for more schemes to evaluate, so we can keep the PHIRST teams busy. If it works the plan is to make this a rolling programme.

Local authorities have huge opportunities to influence health and health inequalities but without an evidence-base they cannot maximise these opportunities. The hope is that this scheme will provide timely and easily accessible evaluations for those who are still hard-pushed Directors of Public Health so that, in the future, there will be an evidence-base.

The views and opinions expressed in this blog are those of the authors and do not necessarily reflect those of the NIHR, NHS or the Department of Health and Social Care.

Helen Walters' blog was originally published on the NIHR website.
Posted by Fuse at 06:00 No comments:

Does antibiotic prescribing penalise communities in most need?

Posted by Adam Todd, Reader in Pharmaceutical Public Health in the School of Pharmacy, Newcastle University

Since the discovery of penicillin by Alexander Fleming in the 1920s, there have been over 150 antibacterial drugs developed and marketed for human or veterinary use. The effect these drugs have had on infectious diseases and population health is remarkable. A once considered serious bacterial infection can now be successfully managed using antibiotics prescribed from the doctor. This was not always the case, as our grandparents may testify: bacterial infections were often fatal and the choices available to manage such infections were limited. Bloodletting for pneumonia, mercury for syphilis, and honey for wound infections were all commonly used approaches before the discovery of antibiotics. 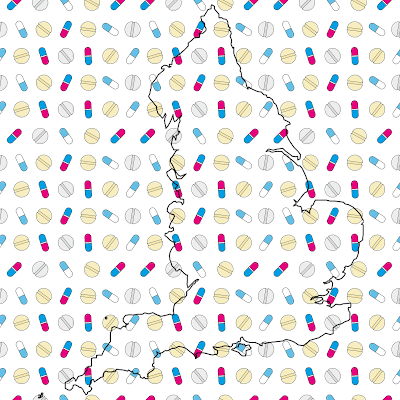 This "golden age" of discovery may, however, soon come to an end, as more and more bacteria are becoming resistant to the antibiotics available to us. It is for this reason that healthcare organisations across the world have been focusing on developing 'stewardship policies' to promote the appropriate use of antibiotics. In England, the situation is no different, and the Department of Health and Social Care has developed an antimicrobial resistance strategy. As part of the plan, doctors have been urged to reduce the amount of antibiotics they prescribe when it is safe and appropriate to do so. As the majority of antibiotic prescribing occurs in primary care settings, such as GP surgeries, healthcare providers working in this setting are set specific prescribing targets.

It is important to establish if the polices are working from an antibiotic stewardship perspective, but also that these polices are fair, and do not penalise communities in the most need of care. Our work aimed to address these questions. To do this, we used antibiotic prescribing data from the NHS, as well as working out the characteristics of the local areas in England using nationally available data sources.

When we considered local factors in our analysis, we showed that the most deprived areas of England had the highest levels of antibiotic prescribing. And even when we factored in two long-term conditions – diabetes and Chronic Obstructive Pulmonary Disease – both of which are associated with increased antibiotic use, we still found higher levels of prescribing in the most deprived areas of the country. We also showed that geography was an important factor too: compared to London, all other areas of England had higher levels of antibiotic prescribing – with the East of England, and the North East of England having the highest levels.

You might ask why this is important? Well, that's a good question. Our work shows that in addition to a national strategy to reduce antibiotic prescribing, it is important to consider local needs too. People living in more deprived areas might, for example, have greater health need for antibiotics compared to people living in more affluent areas. National one-sized-fits all targets might not necessarily account for this. If there is greater antibiotic need in deprived areas, doctors working in these areas might be unfairly penalised for prescribing them. This is not fair on the doctors working in primary care, but may also impact on patients too.

The antibiotic stewardship polices appear to be reducing overall antibiotic prescribing, which is a positive thing, although there is still significant variation in prescribing across England. It would be appropriate for future prescribing targets to account for local factors to ensure the most deprived communities are not inappropriately penalised.

The bottom line is if someone is in medical need of an antibiotic, they should be prescribed it, regardless of the characteristics of their local area or where they live.


Adam leads a programme of research that explores how pharmaceutical interventions, including medication, immunisation and screening approaches, can be used safely, appropriately and equitably at a population level.

Image:
"England Map silhouette" by Natasha Sinegina through Creazilla: https://creazilla.com/nodes/2538-england-map-silhouette. You may obtain a copy of the License at https://creativecommons.org/licenses/by/4.0/ (CC BY 4.0).
Posted by Fuse at 06:00 No comments: