Posted by Heidi Stevens and Katie Webb, Researchers from the Department of Health Sciences at University of York.
** Content/trigger warning: mental health, depression, suicide **
It cannot have escaped your attention that Sunday was Father’s Day (happy belated wishes to all the dad’s out there!), but did you also know that it was the culmination of Men's Health Week?

The campaign run by the Men’s Health Forum encourages men everywhere to give their bodies and minds an MOT and includes resources to boost mental wellbeing. 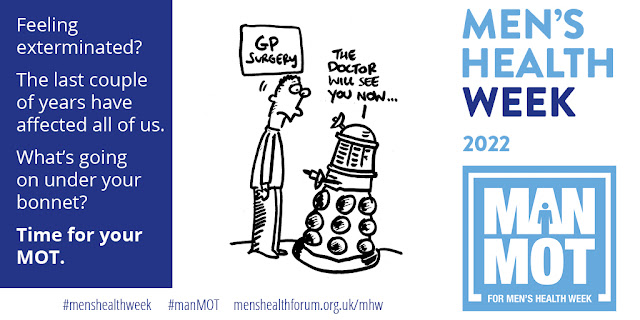 Having just completed work as a research associate on an NIHR Applied Research Collaboration North East and North Cumbria (ARC NENC) funded project focused on severe mental illness, I started a fresh project in a completely different area of mental health at the University of York. Namely, men’s mental health.

Until I applied to work on this research, I had honestly never considered men’s mental health as I had generally always been female gender focused. Traditionally, women’s poor health is viewed as a product of social circumstances, while men’s poor health has been seen as a product of men’s ‘bad behaviour’. Working on this research has revealed a completely different perspective and as such I have developed a lot more empathy towards men’s health.

In England, suicide is highest among men and is the leading cause of death for men aged 20-34 (Men's Health Forum). Similarly, records within NHS ambulance services indicate that the risk of suicide amongst paramedics who are men is 75% higher than the general population (Mars, 2020). Other industries also show higher rates of depression amongst workers who are men, such as construction workers and utility workers, sometimes due to long or unsociable work hours.

Despite this poor picture, only 36% of referrals to psychological therapies are men (Mental Health).

So why is this?

Barriers to improving men’s mental health relate to hegemonic ideals. Although men range in class, age, sexuality and ethnicity, the theory of hegemonic masculine identity in western society embodies shared attributes of stoicism and restriction of emotions to which many men may have been socialised or expected to conform. As such, some men may find it challenging to express or take action in response to ill health as they feel this may make them appear weak or not masculine (Galdas, 2005 )

For example, 38% of employed men with mental health concerns feel that their employer will think badly of them if they take time off for a mental health appointment (Men's Health Forum).

Then there is the use of coping strategies such as substance misuse. Generally, men tend to deal with health problems by seeking refuge in addictions or ignoring treatment needs, as such common mental illness such as depression often remains undiagnosed. In the UK, since 2001, rates of alcohol-specific deaths for men have consistently been more than double those for women (ONS).

The World Health Organization (WHO) states that achieving gender equality requires men to be engaged in transforming patterns of care, including self-care. This may include tailoring health interventions to men and involving men from all backgrounds in the role of mental healthcare co-production and promoting the positive aspects of masculinity such as humour and goal-orientation.

This year in the UK, the All-Party Parliamentary Group (APPG) on men and boys’ issues have been urging the Government to develop a men’s health strategy with a focus on inequalities stating that this would benefit not just men and boys but also women and girls. So, for our sons, fathers, brothers, partners…for wider society, let’s promote a wider understanding of men’s health issues.

Our research in the Mental Health and Addictions Research Group (MHARG) at the University of York aims to prevent the development of common mental illness among male frontline NHS workers. With funding from Movember, we will deliver a brief Behavioural Activation intervention which will be carefully tailored to men with guidance from our consensus group of NHS staff from diverse roles. Behavioural Activation is an evidence based talking therapy which aims to break the cycle of avoidance created by low mood or anxiety, by reinstating valued and meaningful activities.

To find out more please see our links below or feel free to contact us.