Are we really aware of the harm Big Tobacco causes our planet?

Posted by Ailsa Rutter OBE, Director of Fresh and Balance on World No Tobacco Day

The annual World Health Organization (WHO) campaign highlights the many harms of tobacco. This year’s theme explores the growing threat to our environment.

We know that smoking is the worst thing that we can do for our health – 8 million people around the world lose their lives from it each year.

Many of us are already taking action to do our bit in tackling climate change. But do we ever think about how tobacco is polluting our world globally, nationally and here in North East England?

As we face a climate emergency, our fragile ecosystems are being put under even more pressure by the tobacco industry. Tobacco damages the environment, from growing and production, distribution to waste.

Reflecting on my 24 plus years in tobacco control, I’ve seen many appalling tactics from Big Tobacco (the largest global tobacco companies who make billions in profit from killing people and destroying the planet) – including ploys to get kids hooked on a life-long addiction.

It takes a lot to shock me these days, but even I am shocked to read the things that the tobacco industry is doing to our environment.

What we see on the surface is just the tip of the iceberg. Some of the mind-blowing statistics every year: 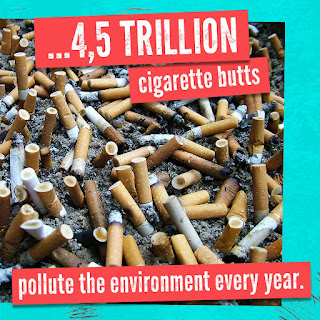 Big Tobacco ‘greenwashes’ its impact on the environment through sustainability corporate social responsibility and marketing initiatives, designed to make people and investors think it cares.

Every day we see its impact on our streets and beaches. Cigarettes are the most commonly littered item in the world.

Cigarette butts are made of cellulose acetate, a man-made plastic material, which takes years to degrade and dump a toxic mix of nicotine, arsenic and heavy metals into our water, soil and oceans before turning into microplastic pollution. It makes me so sad to think what this toxic waste is doing to our marine and river wildlife.

Eight out of 10 (81%) North Easterners in a YouGov poll commissioned by Action on Smoking and Health (ASH) want to see plastic in cigarette butts banned. As part of our World No Tobacco Day activity, we’re joining forces with environmental campaigners to protect the region’s beaches from plastic cigarette butts.

Beyond our region, in the developing world, deforestation for tobacco plantations is happening on a vast scale. Around 3.5 million hectares of land are destroyed for tobacco growing each year. That’s the equivalent of over 1.4 million football fields!

The environmental burden is falling on the countries which are the least able to cope with it. Farmers in low- and middle-income countries are left in debt, with widespread poverty and illness among farm workers. Meanwhile the global tobacco companies continue to make billions in profit.

I reflect on when I attended a world conference in 2006 and heard about young children being exploited for child labour by tobacco companies; picking tobacco leaves and exposed to toxic pesticides and hazardous working conditions. The consequences are life-long and this is happening around the world, as shown in the devastating 2016 Human Right Watch report “Harvest is in my Blood”.

As a mother, with children and grandchildren, I am extremely concerned about the future impact.

The question I think we should ask ourselves is – are we really aware of the harm that the tobacco industry is causing to the environment? If the answer is no, then let’s pledge to read some of the fantastic resources on the issue, including those on the WHO website. Talk to people about it, call for action. Learn more about the tobacco industry; the harm it causes.

We are supporting national colleagues Action on Smoking and Health in calling for a levy on Big Tobacco, to clean up the harm and to further reduce smoking to reach the Government’s target of a Smokefree 2030 (5% by 2030).

In the North East we’ve seen smoking rates fall faster than anywhere else in the country, thanks to the hard work and dedication of colleagues in the region.

But as the major threat of climate change looms, it’s vital that we go further and faster than ever to reduce the tobacco industry’s destructive impact and make smoking history for the next generation.

Ailsa Rutter OBE, is Director of Fresh and Balance, the North East’s combined alcohol and tobacco programme, working to reduce the harm, the death and disease caused by smoking and alcohol.

Tobacco is still the biggest cause of premature death in the UK, with an estimated 74,000 deaths each year in England and over 113,000 deaths from smoking in the North East since the year 2000.
Posted by Fuse at 06:00 No comments:

Planning for a healthier future?

Can we plan for a healthier future by intervening in the built environment? You may be surprised to find out this is not a new idea! Indeed, the very concept of Town Planning emerged in the last quarter of the 19th Century out of a concern for public health and to help prevent the spread of infectious diseases such as cholera.

The resulting Victorian terraces, with fresh water supplies and internal toilets may seem unimaginative, but they were a huge improvement on what went before - and did indeed prove a boon to public health. What’s more many still provide decent homes today.

Early planning thinking was also dominated by a vision that the physical health attributes of the countryside – access to open space, clean air and fresh food could be combined with social and economic (mental health) benefits of the city – including opportunities for education, access to culture and wider social contacts. Such thinking is typified by the Garden City Movement associated with Ebenezer Howard and realised - at least in part - in towns such as Letchworth in, Hertfordshire.

Health was at the core of planning for much of the 20th century, however, in the post-war period it became eclipsed by other issues - particularly the need for economic regeneration. Consequently, the health and well-being impacts of the way our towns and cities were developing was not considered carefully enough.

“...primarily designing around the needs of the private car - rather than humans - has been a disaster.”

In retrospect, primarily designing around the needs of the private car - rather than humans - has been a disaster.  Busy roads now cut noisy polluted swathes through communities; poorer neighbourhoods find themselves served by ‘toxic high streets’ – a deadly mix of nutritionally poor food, subprime financial services, betting shops and other potentially harmful outlets; and vast tracts of poor-quality new build housing - devoid of adequate open space, or local services - have been constructed in the suburbs.  At the same time rates of obesity (and associated health/well-being consequences), respiratory and so-called ‘lifestyle’ diseases have all soared. Moreover, these impacts are not felt equally across all neighbourhoods, and health inequalities unjustly burden the poorest in society.

It does not have to be this way, however. We can plan for a healthier future and create places that support individuals and communities to take healthier lifestyle choices. In ‘Healthy Cities? Design for Well-being’ I explore five inter-related topics and the ways in which the goal of a healthier future can be achieved.

There is for example a large and robust evidence base around our need for urban greenspace (as was highlighted so graphically during the COVID-19 lockdown period). Green (and blue) spaces in our cities not only facilitate physical activity and socialisation (positive for physical health and mental well-being) but can mitigate against issues such as, air and noise pollution, ‘heat islands’ (the significant heat increases in urban areas as compared to their surroundings) and alleviate flood risk. Crucially, however, greenspaces have also been shown to reduce stress levels and help restore cognitive capabilities - for example concentration levels - just by being there.

Planning policies can also be used in conjunction with public health goals to tackle specific health issues. A great example of this, is the development of planning guidance and regulation to tackle the further spread of hot food takeaways – a key component of my ‘toxic high street’ concept, which I explore in more detail in the book.  While planning cannot tackle existing businesses it can limit further spread, especially in sensitive areas – for example near schools, as research has proven the link between hot food availability and overweight/obesity in older children. Issues we will explore at the Fuse Research Programme Meeting “Planning for a healthier future: Priorities and Practicalities” on May 18, 2022, at Teesside University (and available online).

Therefore by encouraging those aspects of the built environment that support healthy lifestyle choices, while constraining those aspects we know are linked with less healthy lives, healthier places are within our grasp – but this can only be achieved if we collaborate across disciplines and garner the political support required to make it happen!

Healthy Cities? Design for Well-being is available to order now