Not addicted but still having an impact: children living with parents who misuse drugs and alcohol

There is growing political interest in the misuse of alcohol and drugs by parents and its impact upon children. The newly published Drug Strategy 2017 highlights drug and alcohol dependent parents as a priority group with an estimated 360,000 children living with parents who are dependent upon alcohol or heroin. 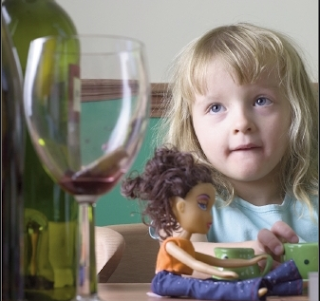 As a registered social worker, I have often identified ‘dependent parental substance misuse’ as a risk factor in many ‘child in need’ assessments conducted by Children’s Services. Around half of all child protection cases, recurring care proceedings (repeat children removed and placed into local authority care) and serious case reviews (enquiries following child death or serious injury where neglect or abuse is known or suspected) involve parents who misuse substances. However, the impact of parental substance misuse is not limited to addicts. The number of children living with parents who misuse but aren’t dependent upon alcohol and drugs is likely to be substantially more than the number of children living with those who are addicts. As such, greater harm in the population as a whole is likely to be experienced by these children.

I have been part of a group of academics and clinicians who have recently concluded a rapid evidence review funded by Public Health England (PHE). The review found evidence that parents who misuse, but aren’t dependent on substances, can have a significant impact on the physical, psychological and social health of their child. For instance, in early childhood we found that children of mothers misusing alcohol [1] were twice as likely to suffer a long bone fracture and five times as likely to be accidentally poisoned, than children whose mothers do not drink heavily. Children of mothers misusing alcohol or drugs are also more likely to require outpatient care or to be hospitalised due to injury or illness, and for longer. The impact of substance misuse by parents continues into adolescence, with our review showing an increased likelihood of antisocial, defiant and violent behaviour in late adolescence as well as substance misuse by the child. However, many of these children and families are not identified as being affected by the substance misuse of a parent and subsequently do not receive the help they need in the form of an intervention.

Therefore, our review also examined the evidence for effective interventions to help reduce the numbers of parents misusing alcohol and drugs. Family-level interventions, particularly those that offer intensive case management, or those which provide parents with a clear motivation (such as those linked to care proceedings) show promise in reducing the problem. Unfortunately, there was little research examining the effectiveness of interventions for parents misusing but not dependent on alcohol and drugs.

To respond to this evidence gap, we designed the PAReNTS study (Promoting Alcohol Reduction in Non Treatment Seeking parents). Within this study we are examining the feasibility and acceptability of alcohol screening (using the AUDIT-C questionnaire [2]) and brief interventions with parents involved in early help and statutory children’s social care services. The brief intervention is an adapted version of the ‘How much is too much?’ programme for parents [3] which combines advice and behaviour change activities and is delivered by both social care practitioners and the local alcohol service. Whilst alcohol brief interventions have been found to be effective in adults who misuse alcohol, little is known about the effectiveness of such interventions for parents with additional and complex needs. This presents unique challenges, for instance, parents may be concerned about the stigma of being labelled as having an alcohol problem, particularly if this could be used as a reason to remove their child from their care. There is clearly a need for a sensitive approach. In future blog posts, I hope to update you on the progress we make with the PAReNTS study and whether it is feasible to deliver early interventions with alcohol misusing parents to improve the wellbeing of children, who are often overlooked in public health.