“Speaking truth to power is all we can do”

Bringing arts and research together to prompt debate about Universal Credit 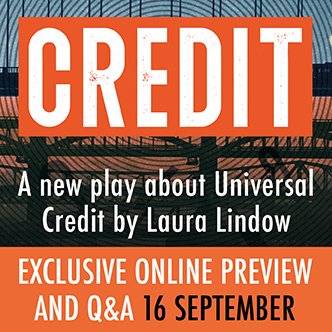 As a researcher, it is not every day that you get to work alongside talented artists, actors and writers. I recently had this privilege as part of the planning and development of theatre production Credit. The play was prompted by research commissioned by Gateshead Council, which showed the negative impact of Universal Credit on vulnerable claimants and staff supporting them in North East England. We were grateful to participants who shared their stories so openly and wanted to use the findings to prompt wider debates about welfare reform, beyond published academic papers.
I had limited knowledge of Universal Credit before starting the research in 2017, when community members began voicing their concerns about the roll out. I was shocked by the insights gathered during the fieldwork in 2018. Credit was the culmination of a collaboration with Cap-a-Pie theatre company, who we approached with our ideas. Unfortunately, plans for a theatre production were shelved in April because of the COVID-19 restrictions. The team worked hard to create an online rehearsed reading of part of the play, brilliantly performed by two skilful actors. Supported by a panel of knowledgeable and passionate local and national speakers, we negotiated the challenges of an online post-show discussion. We were unsure how it would go, as we joined by more than 400 people who watched the 40 minute extract from the play. Over 150 stayed for the live Q&A and discussion afterwards, providing thoughtful comments and feedback. 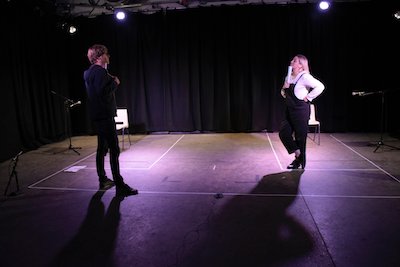 During the panel discussion following the evening performance, the writer, Laura Lindow, commented that she hoped the audience could “hear her own fury in the poetry”, hoping it would “smack everyone around the ears”. The reactions from the Q&A suggest that participants felt similarly moved, describing Credit as:

“I had tears in my eyes watching this”

“Heart breaking, but very realistic. Especially poignant was the reference to starvation”

“The reference to loan sharks took my breath away, eased so gently into lives, but so destructive”

The questions, observations and exchanges with panel members were insightful and engaging. The audience challenged us as researchers to think about how to move beyond the echo chambers of online events to ensure the messages reach those in positions of power to affect change.

As a result of this screening, we have made more connections, with people who have claimed Universal Credit, and academics doing research in related areas. Maria Thompson was one of the people we met following the post-show discussion and you can read about her personal experience of Universal Credit in this accompanying blog post. We also made links with people keen to use the arts to communicate their research findings, engage others in wider debates and challenge us to act:

“How do we fight negative perceptions of benefit claimants? How do we continue to show the need for a supportive welfare system?”

In the feedback, participants commented on the importance of changing negative stereotypes about claimants. At the end of the evening performance, Patrick Butler, social affairs editor from the Guardian newspaper called on revisions to UC to be made with the input of claimants who have direct experience of the system.

“For me, a decent social security system is a citizen's right. It has to be effective, it has to be humane. I think it has to be an entitlement, not a privilege or reward for good behaviour.”

We’re keen to use the play in different ways to stimulate debate and reflection. Emotions clearly have played a role in galvanising action. We have received requests to use it in staff training and to promote arts/research collaborations. As one participant commented:

“We don’t make best use of art in public health. This is such a moving and poignant play. My hope is that one day we can get it into mandated training in the NHS.”

The diversity of claimant experiences has increased enormously since COVID-19, but the stigma is far from disappearing according to debt charity Turn2Us. Recent reports by the National Audit Office (2020) and the Work and Pensions Select Committee suggest that there is still a long way to go before vulnerable claimants’ rights are protected. Perhaps this is the moment for government to show they have listened to those voices who have long campaigned for meaningful change, to ensure that Universal Credit provides the safety net that people need in times of adversity and to keep the changes to the standard allowance introduced as a result of COVID-19.

If you missed the last performance of Credit, we are planning to show more performances in 2021, so keep an eye out. We are working on a short film with extracts from the rehearsed reading of Credit and interviews with those who support claimants, who were involved in the research, script development and production. This will be available on YouTube in the New Year. We will continue our efforts to raise awareness of this important issue and look forward to working with others keen to do the same.

We are grateful to the funders, Newcastle University, Catherine Cookson Foundation and Arts Council Lottery Fund for their support and flexibility.
Images by Lindsay Duncanson
Posted by Fuse at 16:21